The consequences of Truth in Sentencing 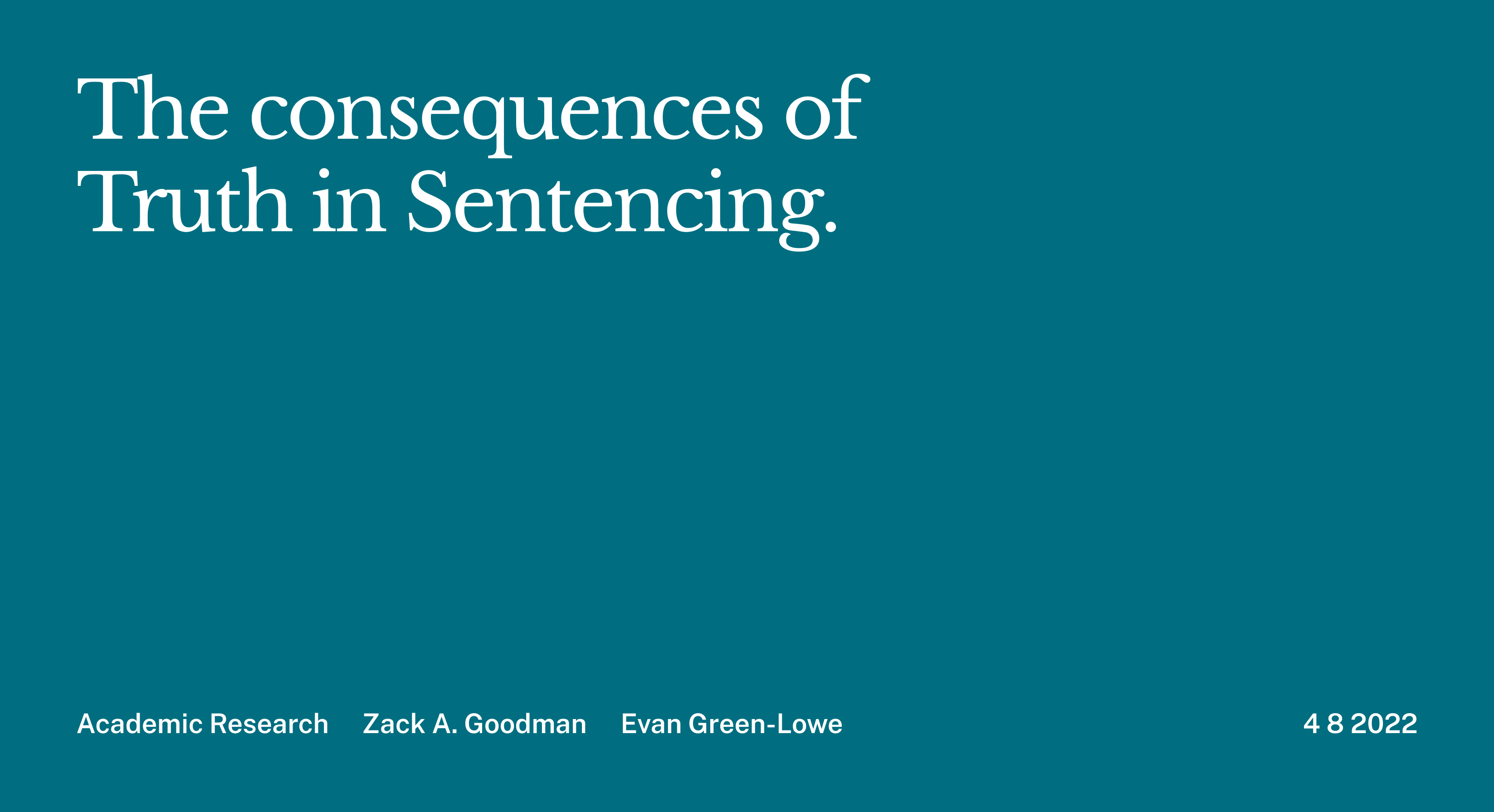 This is the first part in a three-part series Recidiviz has written summarizing recent high-quality academic work about policies and programs that affect justice-involved individuals. The goal is to make research more accessible to practitioners, helping them make evidence-based decisions. As always, we welcome thoughts and feedback.

In 33 of 51 states in America, most prison sentences are not fixed. People can reduce the length of their sentence by completing vocational programs, treatment, or education. Determinate sentencing laws, often called “Truth in Sentencing” (TIS) laws, change this dynamic by requiring incarcerated people to serve a fixed or “determinate” portion of their sentence.

Tennessee House Bill 2656 and Senate Bill 2248, currently being deliberated at the time of this writing, would require people convicted of any of 14 types of felonies to serve 100% of their sentence in prison. Recidiviz recently analyzed the expected impact of the proposed legislation. Before we could project impact, we needed to read up on the effects of TIS laws in other states.

To help us model the impact of the proposed legislation, we read up on how TIS laws have already impacted other states. We set a high bar for studies included in our review. We only included studies that were recently published in reputable peer-reviewed journals or are currently being reviewed. We excluded observational studies that use correlational (as opposed to causal) evidence and those whose methods were unclear or no longer considered

Despite identifying hundreds of articles using a snowballing approach, only a few met the bar we set for quality and credibility. Two studies checked all of our boxes¹ — one from Georgia, another from Arizona.

In this paper, Ilyana Kuziumko studies Georgia’s now defunct “90% policy” that required incarcerated people convicted of select offenses to spend at least 90% of their sentence in prison before becoming eligible for parole. Notably, this policy only affected people who were convicted after January 1, 1998. Consider two individuals who committed the same offense on the same day, but one was convicted in December of 1997, while the other faced longer court delays and was convicted in January of 1998. The person convicted in December may have become eligible for parole after serving 1/3 of her sentence while the person convicted in January would have to spend 90%+ of her sentence in prison.

Kuziumko exploits this natural experiment — comparing outcomes on either side of the policy implementation date — to measure the causal effect of TIS on outcomes like time served and recidivism. As you might expect, she finds that Georgia’s TIS reform increased the amount of time incarcerated individuals spent in prison and reduced the amount of time spent on parole.

A recent working paper by David MacDonald examines a similar policy in Arizona that went into effect in 1993 and required those convicted of felonies occurring after January 1, 1994 to spend at least 85% of their sentence in prison. Unlike in Georgia, Arizona judges were influenced by the policy: they responded by decreasing sentence lengths given to affected defendants, resulting in no net change in time spent incarcerated. But like those in Georgia, incarcerated people in Arizona also lost an incentive to complete rehabilitative programs, resulting in much lower participation.

In Georgia, TIS changed two things: it lengthened time served, and it reduced program participation. In Arizona, TIS only reduced program completion — time served did not change. But MacDonald finds that TIS in Arizona caused the same criminogenic effects as observed in Georgia. This time, however, we know it was the reduction in rehabilitative programming that increased recidivism.

Because there are few credible papers that estimate causal effects of TIS laws on outcomes for justice-involved individuals, we find it important to highlight the highest quality research on this topic to best inform decision makers. These two natural experiments from two different states find effectively the same unintended and critical consequences. Truth in Sentencing reduces incentives to complete rehabilitative programming, increases risk to safety for correctional officers and individuals in prison, and increases recidivism. If the goal of TIS is to increase public safety, these consequences may cause the policy to backfire.

¹ We considered papers published in the past two decades in reputable peer-reviewed journals as well as working papers submitted for publication. Among these, we only reviewed papers whose authors analyze experiments or natural experiments in the United States.