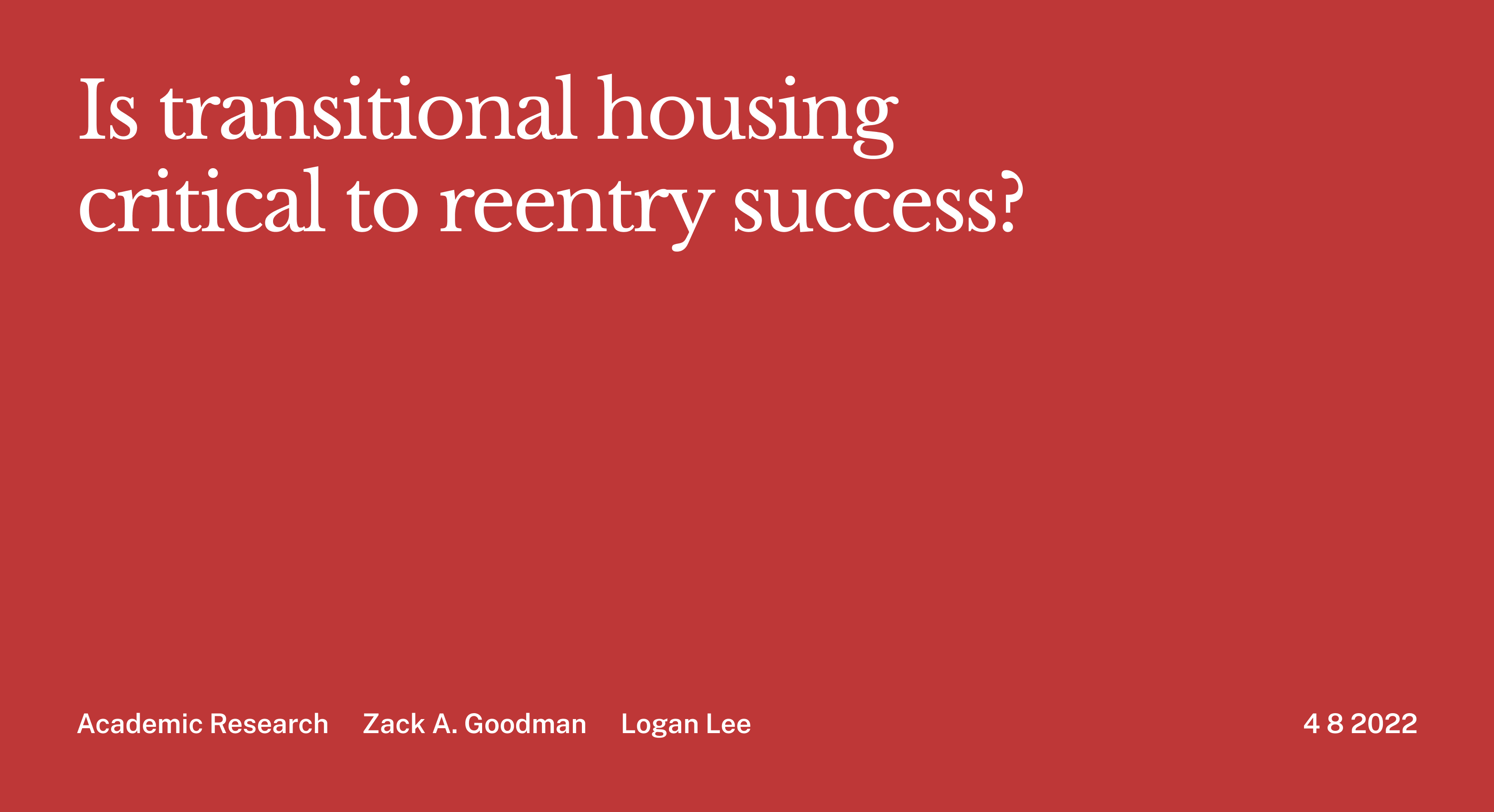 This is the third part in a three-part series Recidiviz has written summarizing recent high-quality academic work about policies and programs that affect justice-involved individuals. The goal is to make research more accessible to practitioners, helping them make evidence-based decisions. As always, we welcome thoughts and feedback.

One solution employed by a majority of US states is transitional housing, commonly known as “halfway homes” or “reentry centers,” which offer people a place to stay as they transition between prison and parole. While 700,000 people are released from prison annually, state and federal transitional housing facilities only have capacity for roughly 60,000 people–at a cost of about $1 billion per year.

Why is determining the impact of housing so challenging?

A naive approach involves comparing outcomes for those who spend time in transitional housing to those who do not. However, this method suffers from selection bias: those who stay in transitional housing may be different in important ways from those who do not, which itself could drive differences in outcomes. Perhaps those who are not required to stay or opt-out are more likely to have a supportive family member they could live with or more means to afford stable housing.

The next best thing is a natural experiment–some setting in which an individual’s decision to stay in transitional housing is strongly influenced by a policy or something else out of the individual’s control. Thus, when otherwise similar people vary only in whether they stayed in transitional housing, we can assume that differences in their outcomes are caused by housing itself. Next, we review an article that exploits a natural experiment in Iowa.

Instead of requiring stays in halfway homes, what if states provided housing vouchers or other forms of stable housing? To our knowledge, no experiment has tested these programs,² though one study of the “Housing First” program in Vancouver found that providing housing to people experiencing homelessness reduced future convictions.

Another author attempted to answer this question using a natural experiment. In this working paper, Timothy Young compares released individuals who returned to areas with high availability of affordable housing to those who returned to areas with fewer options. He finds small but significant reductions in recidivism when affordable housing is widely available, providing some confidence that greater housing stability would likely improve reentry success.

Justice-involved individuals often report that stable housing is critical for reintegration. The papers we review here make it clear that simply providing a place to live is not enough: the type of housing, supervision rules, and peer influence should all be taken into consideration. Research on the effects of providing free or subsidized housing (e.g., providing housing vouchers to the housing insecure) is limited and should be expanded. If programs that reduce crime and subsequent incarceration can be identified, the societal benefits will easily justify the additional costs.

¹ This study, published in 1977, is the only known experimental evaluation of a transitional housing program.

² Although researchers have studied multiple housing programs, none have experimentally tested programs that provide housing vouchers to people leaving prison.