How fines and fees affect state revenues and recidivism 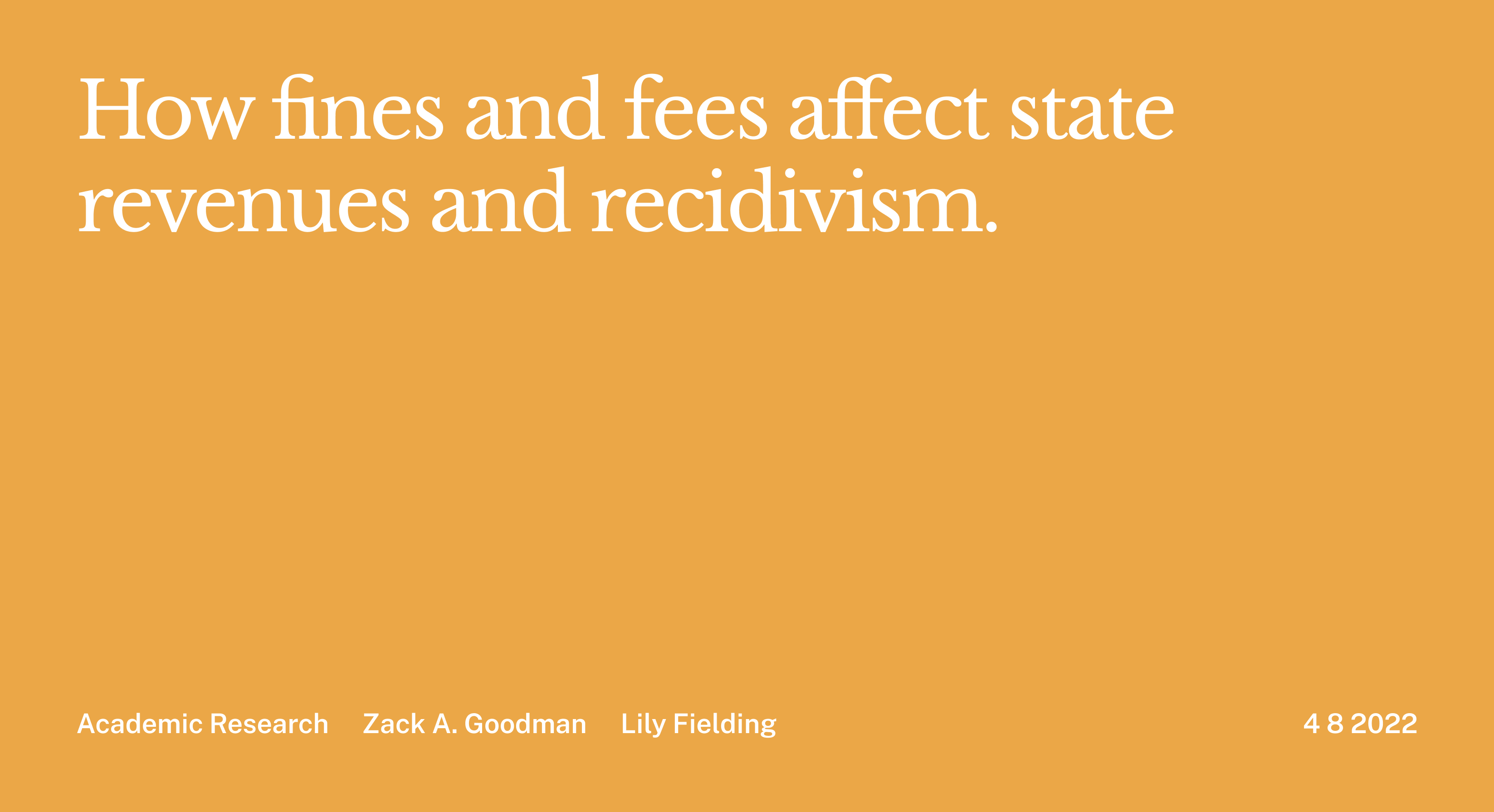 This is the second part in a three-part series Recidiviz has written summarizing recent high-quality academic work about policies and programs that affect justice-involved individuals. The goal is to make research more accessible to practitioners, helping them make evidence-based decisions. As always, we welcome thoughts and feedback.

Fines and fees are commonplace in our criminal justice system: across the US, justice-involved individuals owe over $30 billion. While proponents suggest fines and fees deter crime and help to finance justice institutions, opponents argue that they predominantly affect economically disadvantaged people, add otherwise unnecessary stress, and may ultimately increase recidivism.

Recidiviz reviewed research to better understand the causal effects of fines and fees on state revenues and crime. Although many scholars have studied non-criminal traffic fines, we focus on fines or fees associated with misdemeanor or felony offenses. Below, we summarize two recent papers that use experimental or quasi-experimental¹ methods to estimate their effects.

This working paper by Tyler Giles examines the effects of a hike in fees for misdemeanor defendants in Wisconsin. The state increased fees by $200 starting January 1, 2014, allowing the author to compare outcomes for those convicted in late 2013 to those in early 2014. Since we should expect people on either side of the policy implementation date to be similar, we can attribute observed differences to the policy itself.

Unsurprisingly, Giles finds that those convicted shortly after January 1, 2014 were fined, on average, $200 more per misdemeanor charge. However, he observes that people became much less likely to pay: 36% fewer people made any payment towards their charged fees within a year of conviction. The author also finds no significant increase in revenue, despite the higher fees, and notes that increased collection costs may have actually generated a net loss for Wisconsin.

Although the policy did not increase revenues directly, it may have still saved the state money if higher fees deter crime. Such an effect is possible: theoretically, harsher punishments may deter crime. But on the other hand, fees place financial burden on households who are often among our country’s poorest, which may increase crime.²

So what was the net effect on defendants in Wisconsin? Giles finds no change in probability of a subsequent charge, but he finds that charges became more severe: the likelihood of a new felony charge increased by about 25% while the likelihood of a new misdemeanor charge correspondingly decreased. Since felony charges are more likely than misdemeanor charges to result in conviction, he finds that probability of reconviction within two years increased by about 18%.

A randomized experiment might be the most credible way to estimate the effect of fines. However, there are obvious ethical concerns with the government randomly assigning fines to individuals as punishment. In this experiment, Devah Pager and her coauthors paid the fines and fees of randomly selected defendants who owe them, an ethical way to experimentally vary court debt.³ They then compared outcomes of those selected (the “treatment” arm) to those not selected (the “control” arm).

First, the authors document that treatment participants were less likely to experience new court actions. Specifically, courts were significantly less likely to issue warrants for nonpayment, intercept income tax refunds, or hire debt collectors. The authors also tracked fee payments and found that after one year, control participants paid on average less than 4% of outstanding court debt — only $43 — and 80% paid nothing.

Second, the authors estimate the effect of relieving fees on recidivism. The authors find no statistically significant effects, but the sample sizes are too small to reach any definitive conclusions.

We share the key findings of two papers that estimate the causal effect of fines and fees on revenue and recidivism. Both papers report very low payment rates and suggest that fees, after accounting for collection expenses, may actually cost the state money. The two papers report different findings for recidivism. In Wisconsin, the new fee increased the likelihood of felony charges and reconviction. In Oklahoma, relieving debt had no effect on charges or convictions after a year, though the estimates are imprecise.

Taken together, fines and fees appear to be neither an effective way to fund state agencies nor to deter crime, at least not for populations with low capacity to pay. Given the potential harm to public safety and minimal effect on state revenues, policymakers should consider phasing out the use of fines and fees for felonies and non-traffic misdemeanors. Existing evidence suggests that more lenient sentencing for misdemeanors or restorative justice conferencing and community service as alternatives to felony prosecution may reduce recidivism and save tax dollars. Future research should directly test the effects of these interventions as improved mechanisms for reducing crime.

Reforms like these provide opportunities for future research that will shape our understanding of how fines and fees affect justice-involved populations.

¹ When randomized controlled trials are not possible, researchers often turn to natural experiments to estimate the effectiveness of policies, practices, and programs.

³ Since funding to pay for fines was limited, it was not possible to pay everyone’s court debt. The authors used a lottery to ensure everyone had an equal chance of having their debts relieved, considered the fairest way to allocate a limited resource.